How to Prepare a Camino Budget

One question that many people ask whilst planning their Camino revolves around budgets.  How much do things cost and how much money do I need to take.

So I thought that I would share my budget as well as a few financial related tips.  So here is my budget for the Camino Frances during May/June 2015.

You can probably walk your Camino on a budget of 25-30 Euros a day (as at 2015).  That will mean staying in shared accommodation, eating cheap meals, picnic lunches, maybe doing some cooking yourself and so on.

My budget is kind of at the other end of the scale.  100 euro/day.  But I am sure it will be of interest to potential Pilgrims who are not ‘drawn’ to the communal  style of Camino accommodation and who may prefer greater freedom to eat and do what they like.

I’ll add another couple of cheaper versions of the budget below.

I won’t go into why I chose not to stay in Albergues. I’ve explained that elsewhere. (health and privacy issues)

This budget does not include travel to and from the Camino.  But does include 3 days spent in Santiago at the end and a day in St Jean at the beginning.

Unbudgeted things came up of course.  And these were still manageable within the overall amount.  Stuff like:

All accommodation was private.  As in a private room.  These were generally small Hotels, Cara Rurals or Albergues that also had private rooms.  Except for 4 times I had a private bathroom.

I used the Brierley guide mainly for route planning and information.  It’s not that great on non-Albergue accommodation.

Miam Miam Dodo, the French guide is great for accommodation and easy to understand even if you don’t speak French.  I used that a lot.  I had both guides on my phone.  (I just scanned the books)

And for the larger towns, booking.com was excellent.

I started off booking just one day ahead.  Then as I became more comfortable/confident physically, would sometimes book 2-3 days ahead.  For the ‘circus’ during the last 100 kms, I booked all accommodation a few days before I got to Sarria.

I used a debit card for cash.  This was ‘loaded’ with Euros prior to leaving Australia.  I then used this to withdraw from ATMs or pay for accommodation where they accepted cards.  (About 15-20% of cases)

Expect to have to use cash for everything though.  ATMs abound, but plan that you might not see one for a couple of days sometimes.  And good advice I got was don’t use ATMs when the banks are closed!  Just in case it keeps your card.  My bank (Commonwealth) actually provides 2 cards with their service, in case one is eaten by an ATM.

I was well under budget for meals, as I tended to eat the Pilgrim menus which are great value at 9-11e including a half bottle of wine.  A few times I tried a la carte menus, but to be honest, the food wasn’t much better than the Pilgrim menus… 🙁

Breakfast and lunch ended up being a bit cheaper than budgeted too.  And water.  It’s only 0.5 – 1 euro a bottle.  I mostly filled my water bladder each morning in the bathroom.  Sometimes I bought an extra bottle along the way.

But the savings on my budget were taken up by other unbudgeted things.  Like topping up my Spanish SIM card.  I went through about 200e on the SIM card, but that was mainly uploading videos when the wifi was too slow.

If I went again, in a similar ‘style’, I would probably plan on the same budget, but not spend it all.

But here are a couple more versions of my budget that are ‘cut down’.  Just be aware that there is no ‘contingency’ in these two budget versions for unforeseen expenses.

This would merely require a bit more care in seeking out cheaper accommodation.  Not difficult.  Maybe cutting back a bit more on café snacks, not buying much bottled water etc.  Easy to achieve. 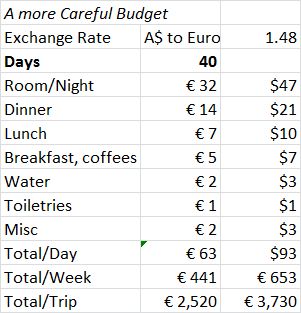 An Albergue Based Camino Budget. (e35/day) 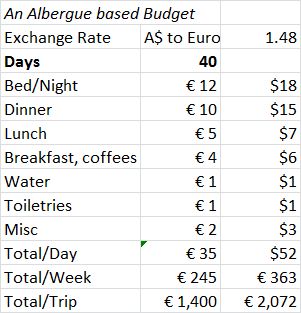 Just a note on Albergue costs.  You will come across some that are Donativo.  (Donation).  This does not mean Free!  You should aim to donate an appropropriate amount.  i.e. THe normal cost of an Albergue.

I recently heard a story of a Donativo Albergue not being able to feed the Pilgrims an evening meal.

Too many people had taken Donativo as Free and there was no money for food!

We were full of excitement on that first day out...

The Challenges of Walking the Camino with your Best Friend!

It seemed like a great idea, but the descent...

Sharing Camino friends could be risky…

Tomas had a profound impact on me when I first...